If you would like Spain quote click here or please e-mail the details of your move to Spain. Alternatively phone For all Spain and European removals telephone

Based in Manchester and Midlands UK to Spain I Quote Cheaper Removal UK to Spain. We move to Costa del sol Malaga Costa Brava Costa Dorada Costa Blanca. Removals to Torrevieja moving you direct from anywhere in the UK to Southern and mainland Spain mudanzas

We offer door to door services from the UK to the major Spanish principalities in Malaga Barcelona Valencia and Alicante. Our rates for moving to Spain include UK collection and delivery direct to your home in Spain. Part load or your dedicated van.

YOUR REMOVAL FROM THE UK TO SPAIN

Here's how it works. Firstly you need to contact us so that we can give you a quotation. Once you have decided to move with us we shall need to arrange a day to collect your effects, which will then be taken direct to your new home, if Spain usually three days or stored until your desired delivery date. Once onsite at your premises we position your effects where required and unwrap furniture. 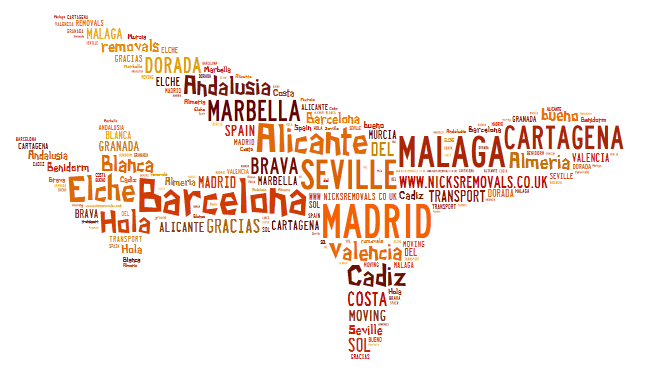 To get your Spanish Moving quote e-mail details or contact Ralph or Linda by phone, free quote and advice with no obligation

Overseas Removals Services to Spain. International removals to Spain out of London Manchester and all the UK to the main hubs of Malaga Barcelona Valencia or Alicante Torrevieja . Our Moving Services UK Spain cover all main Spanish towns and cities. Nerja Torrox Velez Malaga and Rincon de la Victoria.

property,emigrating and other overseas payments.

Villas and Properties for sale in Valencia Spain Bars, cafe bars, restaurants, shops, offices and many other businesses for sale in the Costa del Sol, Spain. Honest advice, guaranteed lowest prices and full relocation service. Our service to you is completely free of charge. New Developments & Off Plan Spanish Property Specialist.

How do I set about moving to Spain?

Documentary about : Moving to Spain
Having bought your dream home in the sun your next major step is packing up your belongings and actually moving to Spain. Most people opt for a removal firm to take the stress out of what is already a highly stressful experience. We specialise in small door to door removals to Spain carrying just your belongings, so you get a definite time and date for delivery we ship your load from the UK and other northern European countries within three days, giving you an exact arrival date.

Weigh up the benefits of discarding or selling furniture and other bulky items before leaving and replacing them on your arrival in Spain. Many Spanish properties are sold either fully or part furnished because they're bought and sold among ex-pats who don't want to go to the trouble and expense of shipping heavy goods. Spain is awash with "muebles" shops selling good quality, reasonably priced furniture. And you can pick up some good bargains at house clearance sales organised by foreign owners selling up and moving back to UK.

Adapting to life in Spain. Frustration and confusion arise anywhere when you buy or sell a house. Spain is no different.

There are many reasons why a family may want to leave the security and comfort of their own country but the primary reason among expatriates seems to be the desire to live in a land which is not quite so generous with the rain and cold. For others, as old age approaches, thoughts turn to health and many are aware that the Spanish Health system has an excellent reputation with no significant waiting time for treatment.

Spain, with its 315 days per year of sunshine, large expatriate communities and low cost of living is the logical choice and high on most lists. However, there is much to think about before such a move is undertaken. If you have no need for work after doing your bit then get on that flight - the Spanish sun is waiting to welcome you. On the other hand, if you require a regular income in order to be able to support your family then you need to give careful thought as to how you are going to achieve this.

The Spanish are extremely tolerant of their country's invasion by so many foreigners. Seemingly there are no problems, with nationals of many different countries living harmoniously in Spain. Spain is a "melting pot" for EU citizens and is probably the most international of any of the World's countries. Many Spaniards speak several languages, Unfortunately, the British are not so gifted and by necessity, clump together so as to be able to communicate.

A significant minority of British expatriates are critical of Spain, complaining about the Spanish "mañana" mentality, the lack of sophistication, poor services, even the weather is criticised Sometimes for being too hot, other times because it may be raining.

Time and time again you will hear the same people saying "back in the UK" etc. When asked the question why if the UK is so good don't they return? - the answer is invariably silence or the single word "well"! Couple this with the price of alcohol and no doubt you are somewhere near the truth!

If your idea of heaven is the UK with permanent sunshine, no matter how hard you try, you won't find Spain measuring up to what you want. Spain is different. The differences are those things which make up the character of both the country and the people and which help to make it so attractive to the many foreigners who holiday and who often go on to live here permanently.

Spain with its red "tape and laid back" attitude to almost everything can be frustrating. Not only when you first arrive but probably for the duration of your stay. However, the Spanish authorities hope that you will like their country - (in which you have as much right to reside as they do) and are aware that each month foreign residents are cashing their pension cheque's in Spanish banks, producing prosperity for all.

Culture Shock: Moving to Spain Relocation to Spain: How will you settle?

Many of your friends and family will be envious of your move abroad and you are probably exhilarated by this exciting adventure. That is why it will be difficult to 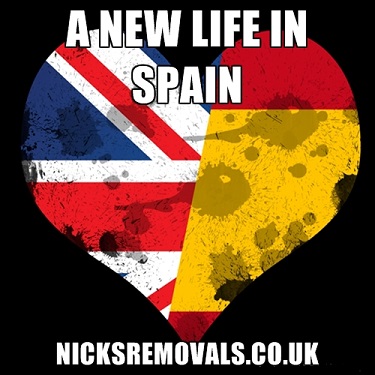 understand and accept that there will be a point when the blues (culture shock) will settle in.

Not many people will commiserate with you if you have a good relocation package and when you should be having fun. But being an expatriate comes at a price. You will be lonely in the beginning and see a lot less of your family and friends. Since international phone calls are quite expensive, you will not call whenever you feel like it. You will miss things from your home country that you never thought you would miss. But, remember that if the relocation does work out it will be an enriching experience for you and your family.

Here are the four stages of culture shock that most expatriates experience sooner or later.

You are happy in dealing with daily life and local people. You feel that there are many things that are similar to your home country. Everything and everyone is charming.

You are experiencing problems doing ordinary things like writing a check, not finding the groceries you need, and not being able to express yourself. You feel helpless. You are starting to see the differences in your host country. Everything is better in your home country. You are getting very frustrated, lonely and possibly blame your spouse for the move. Usually the spouse who is working will go through this stage at a later period. He will have to adapt to the local customs, and this can cause some friction.

You cling on to your home country, burn up telephone bills, and become reclusive. You find it difficult to make new friends.

You start understanding that although things work differently in your host country, it does not mean that it is worse, and that life in your own country is not perfect either. You start accepting your new life and try to get the most out of it.

How to fight the blues

It is really advisable to buy books on the country that you are going to live in. There are the general books about the country and travel guides, but also books that are written especially for expatriates. There is so much to learn and experience that you will find that you have too little time to visit all the interesting places or buy all those wonderful specialties that you cant find at home. Books for expatriates will also help you understand the people and customs of your host country much better and give advice on getting simple daily chores done.

On top of that, even if you feel that you are not a very social person, consider joining an expatriate club, if only for the first year to help you get settled. You can talk about your problems to people who have had the same experiences. You find out that you are not alone and that will help you get through the day. You will find churches of your language and denomination in most European countries and they too can help you make a bond with your new country.

You should expect and accept that basic activities like groceries and banking will take twice as long as you are used to. Just relax. Develop a routine. It is important to talk to your spouse about the difficulty you have in adapting. Give yourself at least 6 months to get over the first difficult stage.

If you learn the language and find out more about the culture, you will feel at home much quicker. Sometimes it is good to take a trip, and when you come back you will have the feeling of "coming home." In the final analysis, the figures must speak for themselves. 60 million tourists and one and one half million foreign residents are proof enough that Spain has much to offer. When you arrive, be positive and look for the good in your Spanish adventure Enjoy the beautiful climate go out and make Spanish friends. If you have children, you have a whole new experience of learning how to cope with them not being under your feet but instead spending most of their time under the sun. Spain has so much to offer but you must remember, no one is going to show you where it is, or demand you take it.

What you do and how you do it, is entirely up to you and this alone will determine the quality and length of time you spend under the Spanish sun.